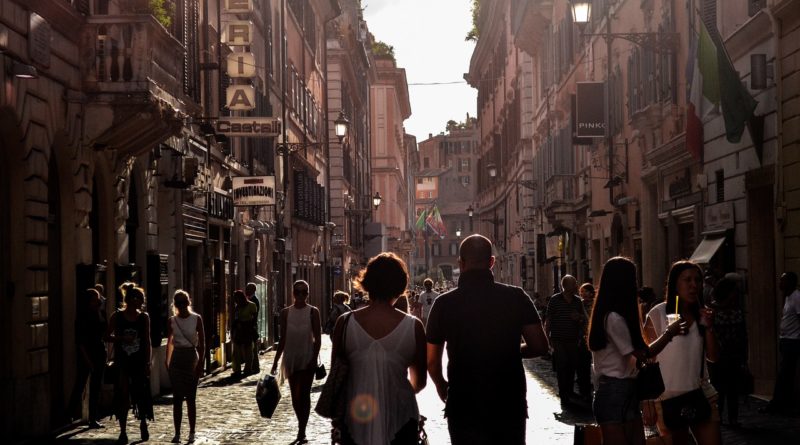 What is the relationship between Italians and the Sharing Economy? Using a SWG’s survey, we try to deepen our understanding of what happened in 2017.

Is it a driver s for the future ?

The Sharing Economy has become to be seen as a driver for the development of the cities.
To the question:“ will the Sharing Economy be important to the future of your city”, 54% answered positively. From this data, we see that the feeling between Italians and the Sharing Economy is consolidating, at least from the point of view of public opinion.
This figure grows to 61% when canvassing residents in cities over 100,000 inhabitants and to 60% with the under-35s.
These data are particularly interesting because these two demographics are where we see the most users of the Sharing Economy.

The most enthusiastic are the users

It is in cities where traffic, lack of space and the high living costs create conditions for the birth of alternative resource management systems. In this context, the Sharing Economy appears as a physiological and spontaneous answer to these daily problems.
Therefore, it is precisely in these places that the greatest diffusion and use of the Sharing Economy occurs. Moreover, young people under 35 are more inclined to use something that is not necessarily a possession. This is a segment of the population that will tend, more and more, to use the Sharing Economy’s services.
This data are , therefore, useful because it helps us understand that those who use the Sharing Economy’s services are satisfied because they see some real feedback in their daily life.

Italians and the Sharing Economy linked to mobility

Among the services that Italians seem most interested in are car and bike sharing. According to the conclusions the answers allowed, 45% are inclined towards car- sharing and 40% bike sharing. The 22% for car pooling. This data show how services related to mobility are the most widespread of the Sharing Economy system.
Furthermore, a study of the Sharing Economy by PWC also shows that mobility will dominate in 2025 as well. In that year, mobility will have 40% of the European sharing economy market.

At first glance, Italians and the Sharing Economy seem to have a
good fit. According to the PWC study, in a note, we read how the socio-cultural context is more favorable to the development of the Sharing economy in Italy and in Spain. 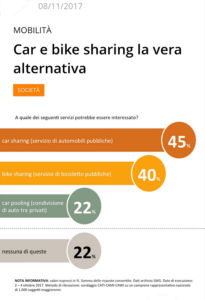 If Italians are asked what forms of micro-economic organization are the best alternatives to the modern capitalist system, the picture is as follows: 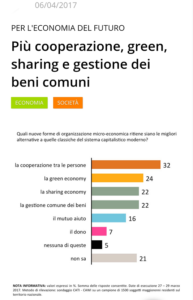 The Sharing Economy occupies third rank with ‘cooperation between people’ and the ‘Green’ economy still ahead. Management of shared assets is in fourth position.

Maybe it is because of the economic crisis, but it seems that Italians feel the need for greater sharing.
Undoubtedly even the increase in environmental issues is leading Italians to reconsider the management of resources.
The environment is becoming a priority with people, as well as an economy that both minimizes consumption and uses it in a more rational way. It is beginning to be seen as a good response to current problems.

The data are supported by the following survey:

The Sharing of services, Green economy and Sharing Economy are coming to be considered as drivers for the future.
Italians not only believe that better resource management is a need but even can be a strategic point on which to build future development.

The green side of Italians

Attention to of environmental items has grown considerably, but mostly between in individual citizens who are more sensitive to this theme they see institutions as being a little less careful. 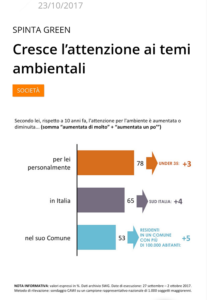 Dissatisfaction with the current economic system

All these themes have a root. Dissatisfaction with the current economic system. The crisis. Globalization anxiety. But if Italians are asked how they evaluate the current economic system, 95% of respondents believe it needs to be reformed.
Of which 63% believe it needs a complete rethink.
Amazingly, the peaks of 70% and 77% are the older age groups those who have lived and fully enjoyed the benefits of modern capitalism. 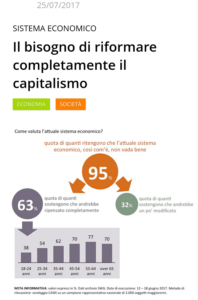 What do the numbers say about Italians and the Sharing Economy?

The figures for 2017 are not in yet and therefore a study by Pavia University, commissioned by PHD Italy, has to be relied upon.
According to this study, 7.3% of Italians use Sharing Economy platforms and the number will trend upwards to beteween 12.1% to 21.5% based on economic growth forecasts.
The study, moreover, evaluates three different hypotheses.

The Sharing economy could be worth € 14.1 billion in 2025 according to a base scenario and if it is particulary successful, it could reach € 19.4 billion.

The most optimistic scenario,hypothesizes € 25.1 billion with 21.4 million users. That means 1.3% PIL.

From what we have seen, Italians sentiment about the Sharing Economy is positive. Studies show an equally positive consumption trend.
At this moment we can only compare these data when those of the final balance for 2017 are in.
In the coming days we will see what was the 2017 aoutcome for the Sharing Economy in Italy. 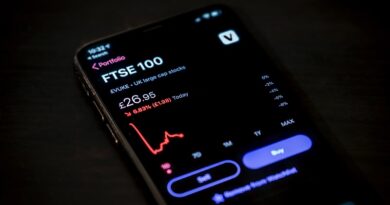 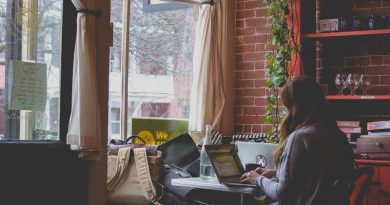